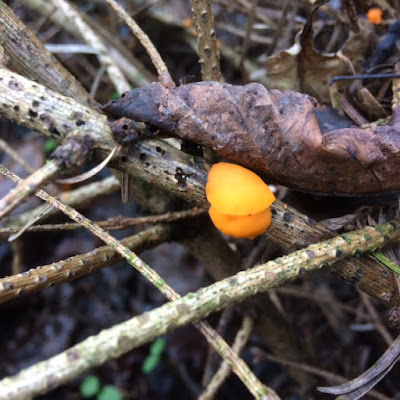 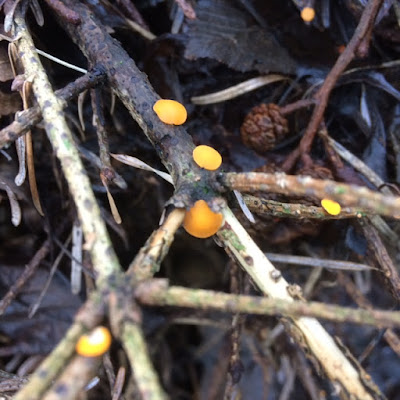 The celebrated Pithya has started fruiting again at Ogden Reservoir, Halifax.
There were many places where it showed on the side of the reservoir opposite the car park.
It seems to be unrecorded anywhere else in the UK.
Its identity was determined by our fungus recorder, Alison Galbraith, a few years ago after our member Bruce Hoyle first photgraphed it and realised it was something unusual.
Alison had it identified at Kew Gardens, London, (Fungus curator's name ?)
Before that it had only been recorded once in the UK, in the North East, in 1888!
It is sometimes referred to as Fir Disco, as it grows almost exclusively on recently dead firs (Abies spp.)
At Ogden reservoir it is on old Christmas trees, Abies nordmanniana, or Caucasian Fir, which in recent years has become the most commonly used tree for Christmas.
These are donated by people and used to build a thick barrier around the reservoir to discourage people and dogs getting to the water.
Two young men drowned here a little while back while taking a dip.

(I am using the singular "fungus", though many people now seem to use "fungi" for singular as well as plural. Am I out of step?)