Four of us turned up for the annual HSS foray on a rainy day. It was planned to go to Jumble Hole Clough, but Alison had a recce prior to the walk and it wasn't producing many spectacular fungi, so we quickly rearranged to go up the other side of Calder Valley with the agreement of everybody present.

We went up the Pennine Way through Callis Wood. It is also the Pennine Bridleway here and we were passed by several groups of hikers, plus fell runners and a couple of big horses kitted up in long distance tackle, with knee pads; their riders similarly protected against the elements and possible accidents in rocky places.

Callis Wood has the same look as the bottom end of Stoodley Glen, not far away, as it is an open mostly birch wood, grazed between the trees, so it is a pleasant "greenwood" to be in. The cattle, however, poach the ground, which is good for the trees,plants and fungi, but a bit lumpy for walking off the track. Looks like a good wood to hold Wood Warblers if ever they recover their numbers. Perhaps Chiff-chaffs and Willow Warblers nest among the grassy tussocks.

The most predominant fungus was Honey Fungus, which was everywhere in large numbers on stumps and fallen logs. (Armillaria.)

One mushroom I had never seen before was Peppery Bolete Chalciporus piperatus. Roger Phillips writes that it is "Edible with caution, very hot and peppery." Sounds like one for someone hooked on hot chillis and curries as I am, though it wasn't the freshest of specimens so I didn't try it. (See pictures.)

After picnicking on some mossy boulders near the top, we crossed the stream by the little arched bridge, followed the solid rock path along the top of the wood towards Horsehold, took the lanes down into Hebden Bridge, then back to the cars along the canal towpath. There was a Kingfisher near the Stubbing Wharf Pub. 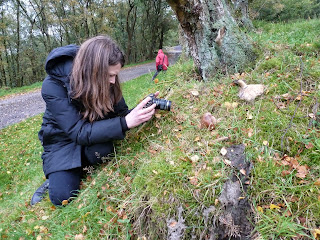 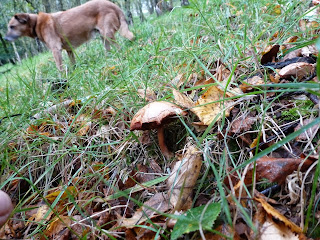 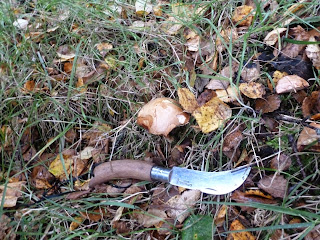 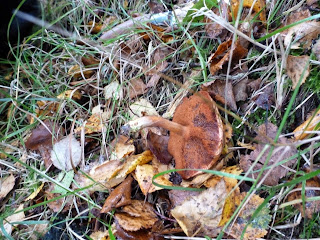 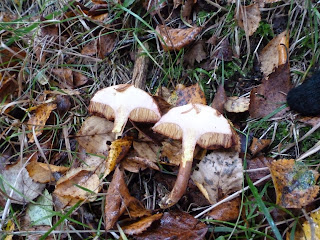 A selection all of the Peppery Bolete showing its pores, also Alison and her dog Basil.
Alison is posting many of the other species we found straight after this.

Posted by Steve Blacksmith at 9:38 PM