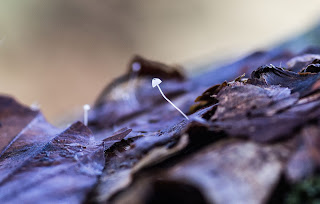 Found by Michael this morning in Crimsworth Dean, who photographed and identified it.
He says it's not uncommon on fallen Fagus (Beech) but it's so very tiny, it's not often noted.

Mycena are a  numerous group. Bonnets is the common name. Named after an ancient tribe - the Mycenae - who wore a distinctive bonnet.

Posted by Steve Blacksmith at 11:53 PM